PVD Philosophy, also known as Mateo philosophy, is a non-dogmatic, book-based approach to life. Front and center of this philosophy is its nomenclature called the Thumos Language. PVD Philosophy is also the name of a television series available via the channel Ri4CTV on YouTube.

On YouTube, PVD Philosophy is an amateur television series focusing on the non-dogmatic, consummate approach to creation and further development of personal philosophy. Its main features are the philosophical template Mateo and the Thumos language. All are based on the original 2017 book, THUMOS: Adulthood, Love & Collaboration. | Buy the book

Starring Nickantony Quach, the philosopher, and “Skydio One”, his first self-flying camera, the first season is complete with 9 episodes, which were filmed in 2018. The first episode in the second season, PVD Philosophy | S2E1 | Thumos & Mateo, is released in February 2019. All are available via Ri4CTV on YouTube. While the first season focuses more on the history, the origin, and the framework for Mateo and Thumos, the second season focuses more on bringing aboard a new user of this philosophy as soon as possible. | Watch Season 1 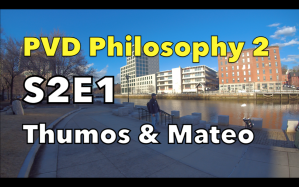 Calling for shared understanding of terms at a level of granularity much finer than traditionally expected, this approach to personal philosophy applies professional change management to self development process. When you first create your personal philosophy, you’re expected use Mateo as your starting template, which is described using Thumos.

Both Thumos and Mateo are two different concepts and thus need to carry two different names. The name “Mateo” was never used until the second season. In the first season, it is referred to as “PVD Philosophy” whereas, in the original book, it is called Thumos philosophy. | Watch Season 2

Mateo is designed to be improved over time. This philosophical architecture is its strength. For those who are not sure of what creativity is, let’s break this concept into four elements: utility, surprise, originality, and beauty. If something is considered creative, it should be useful, unexpected, new, and nice. The creativity in Mateo as a template for personal philosophy is powered by the precision in its nomenclature, which is the Thumos language.

“A non-dogmatic language is a language that is not set in stone as its terms and their definitions are expected to be professionally revised and scientifically improved overtime. Thumos is a non-dogmatic language for use in developing personal philosophy, which is your way of life. Thumos does not tell you how to live. As a set of concepts for use in mastering relationships through shared understanding of terms but at a level of granularity much finer than traditionally expected, Thumos gives you the power of language in effective expression of what you truly want to become.”

The first four episodes in Season 1 of PVD Philosophy were debuted in late 2018. Season 1 was wrapped up, and released in December 2018, with 9 episodes.|

Each of the first several episodes in Season 1 has subtitles in 57 languages, as listed below. Tell me more